CODIFICATION TECHNIQUE OF THE CARTESIO CODE03 Luglio 2018Next 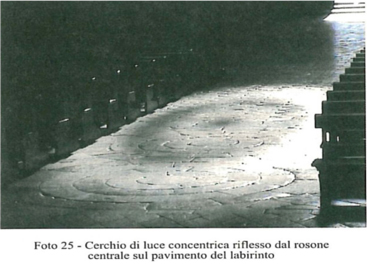 .. I returned home almost reassured and with a certain amount of courage, I began to see in Him (Leonardo) not only an almost supernatural being, but also a person who, like me, had wondered so much to understand what science held sonic and how it was possible to use it. Then I continued in the “deciphering”, this time with little success: many characters, with the means at my disposal, were almost illegible, what I would have given to translate everything that had been written on that sheet!
He was a Great, nothing to say, and continued to amaze me as I examined the parts of that paper. It was the turn of the drawing now: how many times I had seen that image in my studies and how many times I would have seen it again.
I had written it before: in Collemaggio, in L’Aquila, during the Summer Solstice, the same symbolism was created in the Rosoni, as in the Crop and in thousands of other representations scattered throughout the world.

Leonardo knew the sonic geometry, as he knew the octaves and knew how to interpret them on a numerical level, as on a geometrical level and, as I realized, he used the fruit of this knowledge to build as if to design everything that had an architectural base. Not only; on a technical level, he used precisely the numerical ratios that are the result of sacred geometry, to build gears, endless wheels and devices that carried within themselves the golden sharing of sonic knowledge.
Returning to his “Drawing”, meanwhile it was possible to notice how it had been impressed, after a careful subdivision of the interested area, in 5 concentric parts, a further demonstration of how he knew how the 7 tones, (spheres) and 5 semitones (the circumferences below) of
an octave, they had to cohabit, at a geometrical level, always and in any case, therefore, gave its paw of leonine intelligence, tracing an equilateral triangle, I think, partly included in the drawing.
The reason for this need was clear to me by examining the second photo reported by Drunvalo 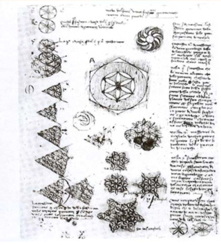 Here, at the top left, it was possible to notice immediately, as if it were glaring, for the Genio, the sonic use of its “portions”, in fact the first image consisted of an “8”, two circles, superimposed, inside “12” petals stood out, then repeated the same operation, using very precise “angles”, quite similar to the one traced on the Octaves of the first sheet, with the corresponding number of petals alongside, to create a Solomon Seal consisting of 48 “Petals” and two triangles of 24.
It was also visible, at the top right, a “ventolina” to “Otto” blades, which was often used in other technical drawings.
It was enough for me, even if I had left out many other details in those two “sheets”, like the numerical table in the first sheet, where Leonardo multiplied 6, the geometric fruit obtained from the intersection of the Seven Circles, 50 times, for a total of 300 units.
In practice, he transformed numbers, shapes and geometries he used.
Leonardo gave me some writing material! , and it was too important to establish a link between him and the esoteric knowledge of the Etava, because, always he, who by all and without doubt was considered one of the fathers of modern science and official technique, could be the best viatic to demonstrate how , just the official science, was born from a sonic-esoteric birth, of which the same Da Vinci was so proud, to put it in writing.
So the genius could be a winning pick to get closer to the increasingly diverted official knowledge, in such a serious difficulty at this time, to a knowledge that could certainly help us overcome the destructive dichotomy: science-nature.
Michele Proclamato.
(taken from the book “Leonardo The genius of sound”)